DOGS | BEHAVIOUR & TRAVEL | Fears and Phobias in Your Furry Friends

Fears and Phobias in Your Furry Friends

Fears and Phobias in Your Furry Friends

One summer morning, the Nielson family went for a hike with their active cocker spaniel Milo. It wasn’t unusual for Milo to run the length of his leash, sniff his way off the trail into various shrubberies, and uncover every hidden stick he could find. But on this day, Milo’s adventures resulted in an injury. The end of a foxtail (grass seed) lodged deep within his ear canal. As soon as the family realized he was suffering, they took him straight to the vet; the painful grass piece was removed and Milo was prescribed a regimen of antibiotics. What the family did not anticipate was that following this event, Milo’s personality seemed to change almost immediately. He became attached to Mrs. Nielson, and refused to go out for walks or be put on his leash. It was clear that he was suffering some sort of emotional impact from his injury and the Nielsons were left trying to figure out how to help their furry companion overcome the trauma.

Emotional Trauma in Dogs and Cats

Like humans, our pets can develop fear and anxiety disorders. Sometimes these emotional issues are the result of an early experience that was unpleasant for the animal. These situations can be anything from abuse and abandonment, to thunderstorms or hurricanes, car accidents and fireworks. They can also be events that the pet perceived as unpleasant, such as having his or her nails clipped or being bathed, and like Milo, a painful injury incurred while on a walk.

It does not always take an unpleasant experience for a fear to develop, however. If a dog or cat is not exposed to something during the sensitive period of development (up to 3 months of age for dogs and 2 months for cats), – such as people, places, sights or sounds – those things may become fear-evoking stimuli. For example, if a dog or cat has only encountered adults during his or her early development, then the first time with children may be quite scary.

Separation anxiety also presents significant emotional trauma for many pets and a pet’s genetics can contribute to fear levels, phobias and reactions to stimuli as well.

Signs of Fear in Cats

There are specific signs of fear or stress in your cat. Some cats may hide or try to make themselves look as small as possible by pulling their ears back and remaining immobile. Other cats may become agitated or even aggressive. You know your cat is becoming aggressive if her pupils are dilated, her back is arched, her hair is standing on end, her tail is whipping back and forth and she is hissing.

Signs of Fear in Dogs

Dogs express fear in many ways. They may pace, whine, bark or visibly shake. They may cower or hide or, like our friend Milo, they may retreat from activities that once were normal. Some dogs may also appear aggressive, although this is usually a behaviour known as “fear reactivity,” which essentially means the dog is acting aggressively when in fact, he is really scared.

Unlike humans who suffer emotional trauma, our pets can’t talk about their feelings. Experts who try to help a dog or cat who is scared generally focus on what is known as “desensitization and counter-conditioning.” Desensitization is the process of exposing the animal to their fear stimulus, but in a safe, non-threatening environment. The exposure increases gradually and through this process, the pet learns that the event is not followed by an unpleasant consequence. They become “desensitized” to the stimulus.

We can look to Milo as an example. After his injury, he ran and hid every time one of his humans took out the leash. Eventually, the Nielsons managed to put the leash on him and when they first did, rather than take him out for a walk, they just let him walk around the house with his leash dragging behind him. They did this several times until Milo allowed them to open the front door and walk out on the patio. They repeated this small step several times and eventually, increased the walk to the end of the driveway. Gradually, over time, Milo’s walk increased until he could walk without fear down the street. Slowly, Milo is learning again that his walk is something he enjoys.

There are numerous products on the market that can help calm an anxious or emotional pet. The thundershirt, for example, provides gentle compression around your dog or cat’s body that is said to have a calming effect. Other items such as treat puzzles to keep them busy, herbal remedies and music can be effective for some animals.

Sometimes, a pet’s fear can be so intense he or she may need pharmaceutical help to get started with retraining.

In these cases, a veterinarian may prescribe drugs such as anti-depressants to complement behavioural therapy, reduce fear and improve quality of life. (Always speak with your veterinarian before administering any drug to your pet.)

Living With a Traumatized Cat or Dog

In many cases, treatment such as described above, can be successful. But with some pets, the psychological and physiological traumas are significant enough that the cat or dog may only respond partially to treatment. Either way, it’s important to understand how to accommodate your emotionally sensitive companion.

A traumatized animal has a higher likelihood of becoming re-traumatized if he re-encounters major stressors.

It’s a good idea for you to understand your furry friend’s triggers to help prevent any emotional episodes. This does not mean being overly protective, but whenever possible, anticipating foreseeable stressors and trying to avoid them.

A common misconception in caring for a traumatized pet is that showering your four-legged friend with love is all that he or she needs to overcome the fear. This, along with giving your dog praise in stressful situations, reinforces the fearful behaviour. And some dogs will learn to anticipate a stressful situation when they hear words like “good boy,” because they have learned to associate those words with something stressful, like going to the veterinarian.

Experts also advise that when working with traumatized pets, you should never use techniques that might frighten them. This includes shake cans, spray bottles, or anything that shocks the animal. This can be detrimental to your pet emotionally and could make him or her aggressive.

It is most important to remember that there is hope for your furry friend. Making sure that you remain calm, relaxed and cheerful will go a long way toward helping your furry companion. You should also know that you are not alone in dealing with an emotionally traumatized pet and you should feel comfortable reaching out to your veterinarian for advice.

As for Milo, he still has not made it back to the hiking trail, but we hear he is acting more like himself these days and is once again excited to go out for walks. 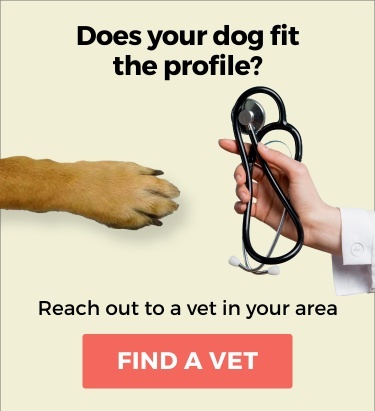 Do I have a Fat Cat or a Skinny Kitty?

Is my cat fat? Figuring out if your cat is overweight is not always so simple. Even being moderately overweight can put your cat at increased risk.

Is My Dog Overweight?

Share Tweet Email Did you know that more than half of all domestic dogs are overweight? Obesity is one of the most common issues veterinarians see in their practices, and while a few extra kilograms on your pooch may seem harmless (and not always obvious either), the extra weight can actually predispose your four-legged friend…

The Hairy Facts about the Dreaded Cat Hairball

Share Tweet Email As much as you love your cat, there is probably at least one thing you can do without – cat hairballs. The sound of your feline friend gagging and retching can be unnerving, and when your kitty finally spits up that scary-looking mass right on your floor, it’s pretty disgusting. The truth…

Share Tweet Email If you’re lucky enough to be home all day with a dog, then you know what a great companion your furry friend really is, especially during stressful times. There have been many studies that illustrate the benefits of sharing your life with a canine friend, including reducing anxiety, lowering blood pressure and…

What to Expect as Your Dog Ages

Share Tweet Email Your dog has been a loving, loyal companion for a long time. Now, you start to notice that as your dog is aging,  he or she is not as active as before, or not quite as attentive. Perhaps he or she is sleeping a lot more lately, or having accidents in the…

Cat Aging: How You Can Provide Loving Care for Your Senior Cat

Share Tweet Email Just as humans are living longer, with improved medical care and better diets, cat aging has also improved, thanks to advanced nutrition and veterinary care. While a cat is considered “senior” sometime between the ages of seven and ten, many indoor housecats are living into their twenties. How cats age is similar…